Chakotay smiled at Kathryn through the force field. " Glad you could make it. "

" Getting Admiral Paris to order me to come see you was a nasty trick. " Her glare threatened to short out the energy field.

" I don't want to see you here! " Kathryn gestured at the ugly gray walls. " Not in this awful place! "

" It’s not home. Kathryn, I do understand. Where you are is my home. " He said softly. " on Earth, or Voyager, or some unnamed planet somewhere. If you're with me then I'm home. "

Tears welled up in her eyes and rolled down her cheeks. " I almost wish we were still in the Delta Quadrant. "

" Then we wouldn't have had our one night together. We'd still be waiting. " Chakotay wished he could reach through the force field to wipe away her tears.

" Except you didn't wait. " It still hurt to think of his dates with Seven.

He sighed. " How many times do I have to apologize? "

" I'm the one who should apologize. " Echoing his sigh, Kathryn wiped the tears off her cheeks. " I thought you knew how I felt without bothering to show you. "

" You were the Captain and protocol –“

" Would protocol have been damaged that much if I kissed your cheek sometimes? Somehow, I don't think giving you a hug would have been that far out of line. "

" Then why didn't you? " Chakotay couldn't hide the bitterness.

" If you had kissed me? Probably exactly what I did when you finally did kiss me."

Her cheeks grew hot. " That’ll be one little footnote they won't tell about Voyager's journey. "

" I can see it – a little plaque in your ready room. " He held up his hands as if holding something.

" Here on this desk Commander Chakotay fucked Captain Janeway's brains out for the first time."

" Fucked? Chakotay! We made love! " She clapped her hands over her mouth as the words bounced off the concrete walls.

" Oh God, it was sleazy, wasn't it? " Her cheeks grew hot remembering laying face down across her desk with Chakotay’s hands gripping her hips and twisted in her uniform jacket. Grunting lustily as he pumped into her.

" And we both loved it. " He was a little ashamed of how roughly he’d treated her, but only a little.

" We’ll have to make up a more romantic story to tell our children. "

" We’ll have plenty of time to think of something. "

It was Kathryn's turn to raise her eyebrows. " You were around Tuvok too long. "

" You’re too good for Starfleet anyway. " Starfleet didn't deserve you. Hell, they didn’t deserve me.

" You know ... " He rubbed his fingers over the scarred tabletop. " They allow conjugal visits. "

" We’re not – " Her heart seemed to pause between beats.

" Of course I want to be with you! Being in prison doesn't change my feelings for you. "

" Yes, oh yes! " She buried her face in her hands as the tears started again. "This is wrong. It's all so wrong. "

" I'm sorry. I wanted it to be perfect and romantic, but this is what we have. " He raised his hand to the edge of the force field. " Marry me, Kathryn. "

She held her hand as close to his as she could. The energy tingled down her fingers into her arm. " Yes. "

" Then they'll let us touch. And make love. " The energy crawling over his skin forced him to pull his hand down.

" You just want in my pants again! " She accused.

" No. " His heart flipped over as she smiled that crooked smile he loved so much.

" They won't make us do it here on the table, Kathryn.”

" Not that we haven't done something like that already. "

" All the matters is that we’ll be together, and it will be beautiful. "

What could he say? Prison was supposed to be horrible. It was all his fault they had to sit here with a force field separating them. " There’s a picnic in a month. Inmates can have in a family member or two.”

" For inmates on good behavior. "

" A certain inmate should stop being so stubborn. " Kathryn agreed. " But the picnic is for family members. "

" Yes. " The black velvet eyes lit up. " Once I have my hands on you, no doubt I’ll be dragging you off into the bushes to rape you. "

" So much for good behavior! " She laughed.

" As long as I get a little before they pull me off of you. "

" I wish I'd had the courage to crawl in your bed with you one night. Or in your bathtub. "

" Why didn't you? " She missed that bathtub.

" I thought we had forever. If I'd known Tuvok would finally become a Maquis and disobey orders, I’d have been a little pushier. "

" I wonder what would have happened if you had? " She'd wondered for the past five years, but never had the courage ask. " Could we have went back to Voyager as lovers or would we have tried to pretend it never happened? "

" It would be like it is now, Kathryn. " He shook his head. " There’s no going back. Before, my body and soul yearned for yours. Now, it screams out for you. "

" Mine too. " She missed him terribly every moment of the day and the nights were torture. " Chakotay, forgive me for making you wait. "

" Stubborn, obstinate, stupid – " Kathryn ticked off her qualities on her fingers.

" One of your saints, Mother Teresa. "

Kathryn laughed. " And you've shown patience worthy of a saint. "

" I need to say it, Kathryn. " Chakotay tugged at his ear as he tried to put his thoughts together. " I tried to lie to myself at first. Told myself her innocence was what attracted me. The thought that she'd never been with a man – well it's an exciting thought for a man. "

" You had a right to be happy, even if it was with someone else. " Remember what you get for lying, Kathryn.

" I wasn't trying to be happy. I wanted to hurt you. I knew you’d be hurt if I dated any woman on Voyager. But Seven? " He ducked his head in shame. " I knew that would hurt you the most. She was your protégé, your child almost. " His voice faded to a whisper. " It was the worst betrayal. "

" You were supposed to be by my side when we came home. " She pouted.

" If I marry you here…” The leap of joy in his eyes made Kathryn smile. “Can we have another ceremony later? "

" Your mother is insisting on it. "

“You've talked to my mother? " Her mother hadn’t said anything about talking to Chakotay.

" Well, I can't talk to your father to ask permission to court you. " He teased.

" You asked permission? " Tears welled up in her eyes again. " That’s so old fashioned and sexist. And romantic. "

" That’s what she said when Tom gave her the gifts. "

" You’re looking at it. " Chakotay spread his arms out wide.

" It’s traditional to gift the parents of the woman being courted. "

" What did you give her? " Kathryn still didn't think it was fair her mother got gifts.

" The material I found on Tarin – the blue shimmery stuff – I remembered you said she sews. And my rosebushes. "

" Your rosebushes? You pampered and nurtured those things for seven years! " Her jaw dropped. "You wouldn't even let Kes touch them! "

" They’re precious to me, but not as much as you. I also gave her Neelix’s edible recipes, including the one for his custard. "

“You told me she loves to cook! " He protested. " Why shouldn't she cook for me?"

A sexy smile spread across his face. " Guess you'll have to help me work it off. "

His dimples made her sigh. " Don't give me dimples now. Not when I can’t kiss you. "

" No! Bad enough I have to be married in a prison – I don't want her to see it! Her bridge club must be giving her a hard enough time as it is. "

" Once they meet her charming son-in-law they'll forgive her for having an ex-con in the family. These dimples can charm any woman between 8 and 80. "

" Admiral Paris can pull a few strings and marry us tomorrow. What do you say? "

" You think he will? " Kathryn remembered how disappointed he'd looked as they discussed some of her decisions in the Delta Quadrant.

" He’s my sister’s father now. He'll do it. " Chakotay grinned. " B'Elanna will just hand him Miral and say ‘pretty please’. "

" B'Elanna saying ‘pretty please’ is a scary thought. " She laughed at that mental picture. " All right! Tomorrow! Jeez, I'm going to be a jailhouse bride. "

" From Queen Arachnia to Jailhouse Bride. Quite a fall. "

" Me either. Unless you want to count the ankle bracelet. " She joked. " We'll go get them together in ten months, two weeks, and six days. "

" I could design something, I've got time. Something Keltic, maybe? The circles remind me of the medicine wheel. "

Kathryn giggled. For a change her ancient traditions had confused him. " Yes, sweetheart, there is. "

" Say it again. " He propped his chin up on his hand. " Call me sweetheart again."

" Sweetheart. Honey, baby, sugar, and darlin’." She smiled as she raised her hand to the edge of the force field again. " I love you, Chakotay. "

" I love you, too, Kathryn. " He held his hand up to hers. Gritting his teeth, he forced his hand as close as he could, risking a shock from the field.

With one last smile, Chakotay stood up and walked out. Kathryn sighed, wondering if she'd ever get used to his habit of not saying goodbye.

Outside, he stood in the sunshine for a minute. His heart was happy and sad at the same time. Was she outside? Was Kathryn standing in the same sunshine?

Turning her face up, Kathryn let the sun warm her skin. Seven years she'd spent trying to get home to stand in this sun. Was Chakotay standing in the same sunshine?

A shuttle roared overhead. Looks like the Delta Flyer. Must be nice to have friends in high places.

" So, how'd it go? " Tom leveled the Flyer out and headed for San Francisco.

" Looks like there's going to be a wedding tomorrow. "

" Congratulations! So why the long face? "

" It isn't supposed to be this way, Tom. I should be the one in prison – look at the rules I’ve broken. The prime directive and the temporal prime directive – and that's just for starters. "

" Hey, I don't ask Fate why she does things. I just go with it. It’s worked pretty well so far. "

" Yeah, and that mouth-to-mouth resuscitation counted as a kiss, too.”

" When was that? You never told anyone about actual lip contact. That was information I needed for the betting pool! "

" ‘I was a jailhouse bride’. Now there's a wedding memory. "

" You know what they say, truth is stranger than fiction. " Tom looked thoughtful. "Hmm… great title for holonovel. "

" Hey relax, Chief. " Tom patted Chakotay on the shoulder. " We’ll find the dress, my dad will do the honors, and maybe he'll be able to get them to take the ankle restraint off for the wedding night. Although ... " He waggled his eyebrows suggestively. " Could be kinda fun. "

" Shut up, Tom. Just get us home, I've got a dress to buy." Chakotay said drily. He shook his head at the irony of it all ... the Maquis rebel goes free, while the Starfleet Captain goes to prison. Maybe he could put a file in the wedding cake.

" Hang on! " Tom threw the Flyer into a tight spiral as they neared the California coast.

Thanks to SuzieQ for the wedding cake line! 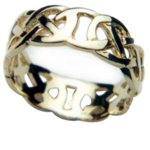