Kathryn looked up from her eggnog to see Chakotay standing next to her table. “Sit down, Chakotay.” She patted the empty seat next to her. “And call me Kathryn, no rank tonight. It’s Christmas.”

“Kathryn.” Smiling, he sat down next to her. “Looks like everyone’s holding up pretty well.”

“I think having a baby to fuss over helps.” She nodded at the table where Sam and Naomi were surrounded by several crew members.

“She’s a beautiful baby.” His smile was wistful this time.

“The timing helps, too.” She took a sip of her eggnog. “If we’d had Christmas a few months after we got here, I think it would have been much worse.”

“True.” Voyager and the had both been pulled into the Delta Quadrant shortly after Christmas. Almost an entire year passed before they had to face the holiday.

“Nothing like being stranded in a strange quadrant and then dumped on a primitive planet to bring people together.”

“Next time, let’s just meet for coffee somewhere.” She laughed and patted his hand. “I’ll even pay!”

They sat in comfortable silence for a time, watching the crew open presents and laugh. The majority of Voyager’s crew had attended the Christmas party, despite the fact that many of them did not normally observe the holiday. There had been a concentrated effort to keep their friends from becoming too blue over the season.

“How about you, Kathryn?” Chakotay asked quietly. “How are you holding up?”

“With string and duct tape.” She blinked back tears at the concern in his voice. “But holding.”

Setting a good example as always. He could see the sadness Kathryn was trying to hide. She could fool their crew, but she couldn’t fool him. “Well, I’m going to call it a night.”

“Me, too.” She sat her cup back on the table. “Why don’t you stop by my quarters for a cup of coffee?”

They walked through the mess hall to where Ayala sat with Naomi. Kathryn held her arms out. “Captain’s privilege.”

He handed the little girl over, a grin on his face. “Her feet may never touch the deck.”

“And nothing wrong with that.” She tucked Naomi in the crook of her arm. Chakotay reached out to tickle the baby’s chin, making her laugh.

“Uh, oh, Captain! Looks like you’re under the mistletoe!” Neelix laughed and patted his red clad belly. “You too, Commander!”

Chakotay looked up. Sure enough, there was a sprig of mistletoe over their heads. He looked around to see Tom Paris with a much too innocent look on his face.

“Caught under the mistletoe! You know what that means!” Neelix pushed his Santa hat back on his head.

Chakotay wasn’t sure if the look in Kathryn’s eyes was panic or not. Bending down, he brushed a kiss across the baby’s soft cheek. “I don’t need mistletoe to kiss my best girl.”

Relieved and disappointed, Kathryn touched her lips to Chakotay’s cheek as he straightened up. The black velvet eyes reflected the same torn feelings.

“Well done!” the Talaxian Santa clapped his hands. The crew around them clapped as well.

“Merry Christmas, everyone.” Kathryn handed Naomi back to Ayala.

A chorus of ‘Merry Christmas’ followed her and Chakotay as they left the mess hall.

They were quiet as they took the turbo lift to Deck 3. As they approached the door to her quarters, Chakotay paused, unsure if Kathryn’s earlier invitation to coffee stood. She seemed to have withdrawn into herself.

“Come inside for a minute?” Kathryn asked softly.

“Of course.” He followed her inside and went to sit on the sofa while she replicated a pot of tea for them.

“Merry Christmas, Chakotay.” She handed him a cup.

He smiled and settled back to wait. After almost a year with Kathryn, he knew her moods and right now she was in the ‘I’ve bottled it up long enough’ look.

“It’s so hard.” She whispered. “I’ve been away from home at Christmas before, but always in com range.”

Experience had taught him to sit and listen. Any movement or sound and she would slam the door shut again.

Setting his cup down, Chakotay moved closer as she began to cry harder. Putting an arm around her shoulders, he pulled her against his side.

“Shh…” He tucked her head under his chin. “There’s nothing wrong with a good cry. My mother always said a good cry washes the soul clean.”

Kathryn used her shirt cuff to dab at her eyes. “My mother says a good cry is as important as a good laugh.”

“And who are we to argue with such wise women?” Chakotay picked up the tissue box from the table and handed it to her.

With a chuckle, she took a tissue and dried her eyes. “What is it about Christmas that depresses us so much?”

“You place a great deal of importance on this one day.”

“Oh, Chakotay.” She looked up at him. “I’m sorry, I forgot that you don’t celebrate Christmas.”

“It’s all right.” Dimples flashed as he smiled. “I’m not Irish either, but I don’t mind green beer.”

“I didn’t see you pushing away the pumpkin pie last month, either.” Kathryn’s mood lightened with that smile. “I wish you could taste my mother’s pumpkin pie – to die for.”

“Why don’t you tell me about your Christmas?”

“Oh, gosh…” She closed her eyes, visualizing her mother’s house. “There’s a big tree with lights and ornaments. Some are so old – Phoebe and I couldn’t put them on the tree because they’re so fragile. Mom and Dad would hang them up where we couldn’t reach them. When they finally let me help, I felt so grown up – so important.”

Chakotay smiled at the image of a thirteen year old Kathryn carefully hanging a treasured ornament on the tree.

“There’s garland and holly hanging all over the house. And a big fire in the fireplace.” She smiled wistfully. “We’d sit on the hearth and thaw out after we played in the snow.”

“Oh, God, yes!” A vision of the clan squared off in battle made her giggle. “One year Daddy built this fort out of snow, and sprayed water all over it to make it solid ice. Then – “ She started laughing harder. “Then – he wound up stuck down in it because the sides were too slick to climb up!”

“And you helped him out?” He laughed with her at the image of her father trapped inside his own creation.

“Hell no!” Tears of laughter brightened her eyes. “We pelted him with snowballs until Mom made us stop!”

“Kathryn! Shame on you!”

“What, you never took a shot at your father?” she nudged him in the ribs. “You know you did.”

A memory came back of him and his sister trying to dunk their father as they swam and played in the stream. “Yes, I did.”

“I knew it.” She patted his leg. “With you on my side, my cousins wouldn’t stand a chance.”

“Does your whole family come over for Christmas?”

“Good God, no! There’s way too many of us. But Dad’s brothers and sisters would come over. And Mom’s. Plus all the wives and husbands and kids. My grandparents, when I was little.” Laying her head back, she looked up at Chakotay. “They’d like you.”

“My mother would fall all over herself.” She pinched his cheek. “One shot of those dimples.”

“I think you overestimate my charms.” The smile belied his words.

For a moment, Kathryn let herself bask in that beautiful smile before tucking her head back down on his chest. “We always had a big dinner. Ham and sweet potatoes – and pies – pumpkin and mincemeat.”

“I’ll be at that end of the table.” He laid his cheek on against her hair. “Where will you be?”

“Right next to you. Otherwise my sister will try to get her claws in you. Or one of fifteen unmarried cousins.” Patting his leg again, she sighed. “We’d go sit in front of the fireplace and drink hot chocolate and sing carols.”

“I’ll teach you. No mouthers in the Janeway house. Then, when it’s late, we’d go upstairs.” She hesitated. “My Mom’ll put you in the guest room.”

It hadn’t escaped his notice that Kathryn hadn’t mentioned Mark. “How far is that from your room?”

“Just down the hall. Will you…” Her cheeks were hot suddenly. “Will you sneak into my room?”

“If I thought you wanted me to.” Carefully, he pressed a kiss to the top of her head. “Maybe if we’d kissed under the mistletoe.”

Looking up, Kathryn pointed over his head. “Look, we’re under the mistletoe.” She slid her hand behind his neck and pulled him down for a soft gentle kiss.

His heart was pounding until he couldn’t breathe. This was the kiss he’d been waiting for all his life. Sweet and hot, fiery and electric all at once.

Tangling her fingers into the silky hair at the nape of his neck, she pressed closer. His tongue traced along her lips and she opened her mouth to touch her tongue to his.

With a groan, Chakotay pulled her tight against him and plunged his tongue into her mouth to taste her. All the dreams he’d had of Kathryn, all the fantasies hadn’t prepared him for the reality of holding her in his arms. She was eager and kissed him back with a passion that left him breathless, as her tongue twisted and dueled with his own.

Breaking free, Kathryn placed kisses across his face until she reached the tribal markings on his forehead. Tracing the lines with the tip of her tongue, she chuckled. “Somehow, I thought they’d taste different.”

His laugh was muffled in the curve of her throat. Nuzzling the soft skin, he drew in deep breaths of the delicate rose scent that had tormented him for so long.

“Ouch!” She yelped as he nipped at her neck. “Watch it, mister! Paybacks are a bitch.”

Laughing again, he bit at her neck once more, catching the tender skin between his teeth and sucking hard.

The small pain made her shiver and she pressed herself harder against him. One hand slid down his shoulder and over his chest until it settled on the hard bulge between his thighs. She squeezed gently, drawing a soft moan from him.

For a moment, Chakotay allowed himself to enjoy her caress before he captured her hand and pulled it to his lips. “No, not like this.”

There was a flash of hurt in the smoky blue eyes and her bottom lip trembled. “I’m sorry – “

“Shh… “He kissed her softly. “Don’t be. I want you, Kathryn, but not like this. Not when you’re sad and lonely.” He brushed her hair back from her face. “I care for you too much to take advantage of you.”

She nodded and gave him one last lingering kiss before he got up from the sofa.

“If you feel this way after Christmas… “He smiled and lifted her hands to his lips.

He was almost to the door when her husky voice drifted to him. “Chakotay... what are you doing New Year’s Eve?” 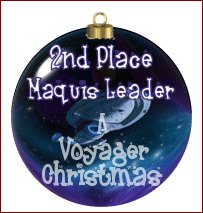 Back to the main page for more Voyager fic