ngel has a beautiful tattoo on his right shoulder blade of a large Gryphon holding the letter "A". It’s similar to the type of drawing once used in texts for the first letter of a paragraph or page back in the day when books were done by hand and many were true works of art.  The Gryphon represents amongst other things, the duality of nature and the wealth of the sun. Just a bit of irony there.

The inspiration for the tattoo seems to be from the Book of Kells. Where it is one of the four traditional winged figures representing the Evangelists. It is the symbol for Saint Mark; with the ox representing Saint Luke; the eagle, ; and the man, Saint Matthew. The book has been in Ireland for centuries, and there is an obvious Celtic influence in the artwork. Celtic knots and circles are prevelant throughout. The book is considered a symbol of Irish nationalism.

It’s unlikely that Liam would have had an “A” tattooed on his back so chances are that Angelus had the tattoo done.  Undoubtedly it stands for Angel although it could stand for Aurelius. Considering his first encounter with the Master that seems doubtful. However, nothing has been shown as to how or when the tattoo was done.

Who knows? Maybe Liam had too much to drink and was with a pretty girl whose name started with “A”? The question Buffy might ask is, since Giles found a reference to Angelus’ tattoo in a Watcher’s diary, how did a former Slayer see his naked back?

Joss Whedon had asked for a tattoo to be created for Angel.  During the filming of the episode Angel, Joss was a little shocked and said that he had wanted a small tattoo such as shamrock or something of that size. However, he decided to keep the tattoo because he felt it suited Angel. Thank you Joss!

What is a Gryphon?

A Gryphon is a Chimerae; that is, a blending of more than one animal. Gryphons are raptorine in the foreparts and leonine in the hind with little exception. The typical Gryphon has an eagle head, forelegs and wings, with a lion hind quarters, hind legs and tail.

Gryphons are fierce but solitary, at least with other species. They prefer isolated areas, and live alone, but for other Gryphons. Their trust is hard to earn, but once one has it, they are extremely loyal. Gryphons are not fearless, but they are very courageous. Perhaps most important of all, they are not foolish. They are very wise beings.

Gryphons mate for life. Once they have chosen a mate, they are forever faithful, and if the first mate dies, they will not take another. 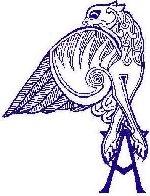 The Gryphon in Mythology

The Gryphon myth originates somewhere in the Near or Middle East. It is found depicted in ancient Babylonian, Assyrian, and Persian paintings and sculptures. It is believed the myths found life around 3,000 B.C. to be the Pharoah's companion in Ancient Egypt, and later became sacred guardians in Minoa.


was assigned as the native country of the Gryphon, and the people of that land made Gryphon talons and claws into drinking cups, they were of so great a size. Like the Unicorn and other species of myth, magickal traits were assigned to the talons. While the alicorn, or horn of the Unicorn, was said to be an aphrodisiac, the talon of a Gryphon was said to detect poison in a liquid when used as a drinking cup. Very handy for the nobility, as this was a common form of assassination.


Gryphons, like birds, built nests, or eyries (aeries), as the nest of a bird of prey is called. The Gryphon laid an agate, rather than an egg, therein. Gryphons found gold in the mountains and made their nests from it.


This made their eyries very tempting to hunters, so Gryphons were forced to keep vigilant guard over their nests. Gryphons had instinct which allowed them to know where buried treasure was, and they would apply themselves to guarding it as best they could, keeping plunderers at distance.


They are found in Greek mythology, neighbors of the Hyperboreans and belonging to Zeus, they took gold from the stream Arimaspias, the one-eyed people of .


It was written by Pomponius Mela, that a certain area was uninhabitable, "because the Griffons (a cruel and eager kind of wild beast) do wonderfully love the gold, which lies discovered above the ground, and do wonderfully keep it, and are very fierce upon them that touch it." Gryphons have always been depicted as guardians of treasure. Gryphons themselves depict gold, as they represent the wealth of the sun at dawn, the gold in the east. They are also said to line their nests, called Eyries, with pure gold, woe be to the traveler looking to steal it.


Romans later used the Gryphon for decoration and in Christian times the Gryphon motif appears.


In Christian symbolism, the Gryphon originally represented Satan and evil, but later came to represent Christ, especially his dual nature, both divine and earthly, as the Gryphon had mastery of both land and sky, and was noble and majestic. Gryphons were said to kill serpents and basilisks, both embodiments of evil, thus protecting mankind. Gryphons symbolize both strength and wisdom combined in heraldry. On medieval buildings, Gryphons were often used as gargoyles, great stone guardians.


The Gryphon has relinquished most of these roles, and today appears mostly in literature and heraldry.


The Gryphon In Heraldry

Gryphons are often depicted in heraldry, such as a coat of arms or signs by gates. Commonly, it is a demi-gryphon depicted... a demi-gryphon is the head of the gryphon only. It is distinguished from a raptor's head by the ears. The Gryphon above is a typical examble of a heraldic Gryphon; they are pictured as angular and thinner, almost cheetah like.

The Gryphon in heraldry stands for many things. Commonly it stands for both Wisdom and Strength and the union of both. Gryphons also are a symbol against greed, as in mythology, they commonly guard gold or other treasures from greedy humans. Gryphons also represent the wealth of the sun -- the light that turns the east into gold at sunrise.

The Book of Kells

The Book of Kells is a Latin text of the Gospels, and some other religious material, believed to have been made by Irish monks on the Scottish in around 800A.D. From the ninth century until 1541 it was kept at the Abbey of Kells in the Irish Midlands. The book is beautiful, and it was a sacred work of art, brought to the altar on special occasions rather than being used every day. Trinity College Dublin has owned it since 1661, where it has been on display in the Old Library since the nineteenth century.

The symbolism of the winged lion of St Mark is more complex. It represents one fourth of the nature of Christ. The man being the human nature of Christ, the lion, the royal dignity; the ox, the sacrifice, atonement and priesthood; and the eagle, the ascension and divine nature. The lion is traditionally supposed to be roaring in the desert and preparing the way. The four Cherubim guarding the throne of God and the Four Corners of Paradise, are sometimes shown with four heads: human, lion, ox, and eagle.

The winged lion can also represent the union of two natures or the androgyne, and hence the ultimate goal of alchemy, fire or the sun. And, like all composite beasts, it suggests primordial chaos and the fearsome and terrifying powers of nature; and the evil and chaotic forces in the world. While in Christian symbolism a lion is considered to represent (as well as the majesty of Christ) the Devil, the solitary hermit, and watchfulness and fortitude.